No products in the cart.

Silk is a natural protein fiber, some forms of which can be woven into textiles. The protein fiber of silk is composed mainly of fibroin and is produced by certain insect larvae to form cocoons. The Silk Road derives its name from the lucrative trade in silk, which was first developed in China, and is a major factor in the connection of a wide transcontinental network of commercial routes. It derives from the German word Seidenstraße (literally "Silk Road") and was first popularized in 1877 by Ferdinand von Richthofen, who conducted seven expeditions to China from 1868 to 1872. Although the term was coined in the nineteenth century, it did not gain popularity among academics or the general public until the 20th century. The first book, The Silk Road, was written in 1938 by Swedish geographer Sven Haddin. Many types are silk quality. This are:

But most popular and demandable silk is the mulberry silk. The states of Tamil Nadu, Karnataka, Andhra Pradesh, West Bengal, and Jammu and Kashmir are recognised as the main producers of this silk. This silk is produced by the domesticated silkworm called Bombyx mori. Bangladesh: The Rajshahi Division of northern Bangladesh is the hub of the country's silk industry. There are three types of silk produced in the region: mulberry, endi, and tassar. Bengali silk was a major item of international trade for centuries. It was known as Ganges silk in medieval Europe. Bengal was the leading exporter of silk between the 16th and 19th centuries.

India; India is the second largest producer of silk in the world after China. About 97% of the raw mulberry silk comes from six Indian states, namely, Andhra Pradesh, Karnataka, Jammu and Kashmir, Tamil Nadu, Bihar, and West Bengal.[26] North Bangalore, the upcoming site of a $20 million "Silk City" Ramanagara and Mysore, contribute to a majority of silk production in Karnataka. In Tamil Nadu, mulberry cultivation is concentrated in the Coimbatore, Erode, Bhagalpuri, Tiruppur, Salem, and Dharmapuri districts. Hyderabad, Andhra Pradesh, and Gobichettipalayam, Tamil Nadu, were the first locations to have automated silk reeling units in India Silk's absorbency makes it comfortable to wear in warm weather and while active. Its low conductivity keeps warm air close to the skin during cold weather. It is often used for clothing such as shirts, ties, blouses, formal dresses, high-fashion clothes, lining, lingerie, pajamas, robes, dress suits, sun dresses, and Eastern folk costumes. For practical use, silk is excellent as clothing that protects from many biting insects that would ordinarily pierce clothing, such as mosquitoes and horseflies.

Fabrics that are often made from silk include charmeuse, habutai, chiffon, taffeta, crêpe de chine, dupioni, noil, tussah, and shantung, among others. 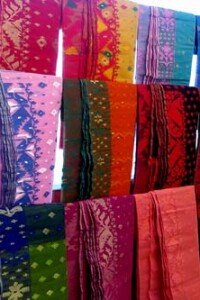